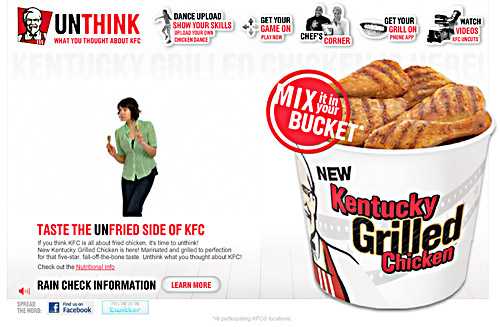 KFC made a coupon available for a free meal which features their new Kentucky Grilled Chicken recently, which got me thinking about fried chicken…and their new product of course.

Strange enough, I noticed that after I got my coupon, it was just a plain old PDF with a very generic bar code printed inside the coupon. Code: 0012 3456 7890 1234. I assumed KFC restaurants would just have a system once you get there to register yourself, because I couldn’t imagine them just giving away an infinite number of meals. I asked myself “Do they expect that people who buy the meal will likely buy a drink, and this will generate a slight profit and at the same time act as a great marketing idea?” You would expect this wouldn’t you?

Well, it appears that the uproar that ensued was due to some sort of error in their system. I asked my friend about his coupon, and he said that his barcode was the same. I joked about printing out a bunch of copied and distributing them to homeless people.

Since the coupon had in small print on it: “RETAILER: Authenticate at www.veri-fi.com”, I expected some sort of registration or something at the store since the coupon given to everyone had the same barcode. That doesn’t seem to be the case. The lady at the counter when I went to redeem my coupon told me that it’s not valid but they would still honor the coupon.

We can see that who ever implemented the system to provide these coupons, didn’t design the promotion to run smoothly. They should have made it required that you identify yourself or something which would limit the number of coupons to one per a customer. Who ever decided to just put a PDF coupon on there, they made a grave mistake. Perhaps they had a dynamic coupon PDF setup, but somehow a bug made this generic one become served to the public. Who knows? I’m sure KFC wants to put this behind them.

It sure does make the name of their promotion ironic however. ‘UnThink’

I did happen to think that their grilled chicken still tasted fried. I happened to ask an employee at my local KFC if it was actually put in a fryer. She told me that they do grill it, and that the fat in the chicken itself gets on the outside and gives it that burned oil film on the surface of the meat. Eh…

But anyway, what was my point of posting this? Oh yeah! Speaking of fried chicken…

Anyone who happens to be in the South Eastern United States, I highly recommend Maryland Fried Chicken 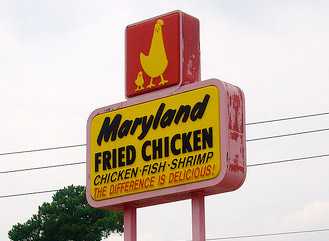