Who was the first person to hurt me? I remember learning how to drink out of the cartoon in the fridgerator from my father. I remember dill pickles in a tupperware container, and pimento cheese used on sandwiches that I didn’t like the taste of.

I remember feeling my mothers love as she said something to me as I sat on the ground next to a recliner.

I remember my father and mother fighting with each other the day before Easter…they stopped fighting to say “The Easter Bunny came earlier than usually”, because he was supposed to come early in the morning before I woke up…not late at night before my parents fought. I remember my mother being depressed and sleeping alot. I don’t remember this period so well, but just now as I remember this I feel a hint of sadness bubble up. My mother wasn’t there for me during this time. She was a constant sleeper during the middle of the day.

My mom dressed me in these little preppy pants with stripped Izod tshirts with the little gator head logo on them. This wasn’t acceptable to the other kids at school. I went to her one day, even though she was sleeping, because I was fed up with being something “other” than what they were because of the clothing they wore. I was sad and bent with madness to stand up for myself. I told her I don’t want to wear these types of clothes. I want tshirts with pictures on them of cool things. Jackets with sporty logos.

The jacket with the sporty logo ended up stuck in a tree one day on the playground. I don’t remember what happened after that.

I remember a big Baptist church in Orlando. The kind where they have these nativity plays during Christmas time, which are a huge production. They practically replace the stage with the set for this thing. I remember having to be there even though I wasn’t interested. I remember having… I had… I have toys. Transformers. I have transformers. They look like a fighter jet, or a car, one moment…then you push a button or pull something out and it turns into a robot. These disappear…I have no memory of why, or how I reacted. I’m reminded later that someone told my mother they were of ‘the devil’. I’m not allowed to watch certain cartoons, such as Ghost Busters (based on the movie) with the green slimer ghost and the guys with plasma packs that drive the old style ambulance car. I happen to get a Ghost Busters car as a present during some holiday, and I slightly fear that I won’t be allowed to play with it long.

Much later, after my mother marries her second husband, my step father growing up, Ricky…I’m in a Sunday school group. I’m discussing what is necessary to not go to hell. They say you just have to believe/love in Jesus. I’m perplexed how someone can believe or love someone they’ve never met. I go along with the charade, just because I have to. Later on I come to hate this cult. I eventually identify with athiesm. It stops my fear of ghosts and of the dark.

Rewind. I remember going to Rickys trailer somewhere else in Apopka (the small hick town I grew up on the border of). I remember my mother marrying him, and I don’t like it, but I have no say in the matter. I’m powerless. I had a gut feeling of some sort. “He’s not my father”, of course.

The kids hurt me. The teachers hurt me. I have an issue with my penis getting into an uncomfortable position, so I stick my hands down my pants often to readjust. The black haired witch, Ms. Monaco, makes me feel like I’m bad for doing this so often. I feel ashamed.

Before this, I happen to have found that my mothers back massager not only feels good on the muscles, but also on the penis. I’m not so sure about this, so I don’t tell anyone. I wonder when I’m uncomfortable so often, if it’s the result of the weird thing I’m doing to my penis when no one is looking. It’s my deepest darkest secret for many years before I catch wind of this being a taboo that everyone knows about called ‘masterbation’. Why was I already under the impression that a person doesn’t talk about this? I don’t recall.

The other kids don’t like me. I don’t have anyone that I can call a good solid friend until 3rd grade when I met Howie. He remains my friend still today, holding onto my $2500 home recording studio in Florida currently, using it to make hip hop music. I remember another kid in 3rd grade who was fat. He had behavioral problems often. He had low self-esteem. I felt sorry for him. I felt sorry for an ugly girl that got picked on, and left out, often. I tried to be cool, but wasn’t included in certain social circles. That hurt me. I couldn’t be friends with Matthew and…Jake or something. They were cooler than me…that was my impression. I wasn’t as good as them. I was estranged at times. I tried to be funny, but people acted like I was annoying.

I was energetic. Moving often, even if I was sitting down I’d be moving my legs up and down. Even today when I’m feeling a bit anxious I play with something with my hands. In 4th grade the teacher saw me doing something nervous like this in the library, while I was browsing through the books. She wrote a letter to my mother. I thought I was in trouble. She told me I’m not in trouble, and acted like she was concerned…caring almost. The letter was recommending something which led to my parents saying something about Ritalin. My highest performing grade was 3rd. I was almost a teachers pet. This 4th grade lady, attractive young blonde woman from alabama…that was my worst time. I had befriended a class clown. I guess I looked up to him and wanted to be like him. He’s the one that made fun of my stomach once…Asked if I’m pregnant one day while we were in line at a water fountain.

I used to get very emotional with this 4th grade teacher, storm out of the classroom dramatically and stand outside of the door. She had a system to keep track of whether or not you got to go to a special recess session at the end of the day, at the end of the week (Friday). That whole year I never had a situation where my card wasn’t pulled. 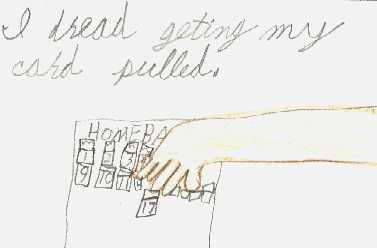