People warned me to not buy a bicycle from Walmart, but I needed a bike and didn’t have the money for a $300+ bicycle at the time. Shortly after purchasing the bike I had to replace the freewheel after it got locked up. Huffy did ship the replacement freewheel to me at no additional charge because the bike was under warranty, however Walmart isn’t a real bike shop which does adjustments and repairs, so I had to arrange for help in getting the old freewheel off and the new one on. 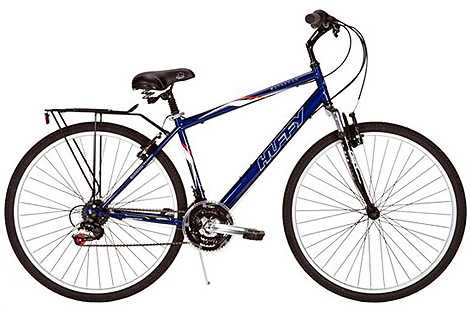 More recently the chain started to come off, and I’d have to put it back on getting my hand all dirty and greasy, and avoid certain gear combinations so it didn’t continue to happen. I figured it just needed to be adjusted or something, so I took it into a local co-operative bike shop - Missing Link. At first the girl who looked at the bike noticed that the cable for one of the derailers was very loose, and that I’d need to make an appointment for them to check it further. I did this and brought it in the following Thursday. Another guy looked at it more thoroughly to draw up an estimate for me. He pointed out that the chain was coming off because the crankset was bent, and that they could try to bend it back. He also pointed out that the foot pedals were shot, the bearings on the back wheel seem to be going. He estimated between $80

I decided to go to their retail shop (across the street from their repair shop), and check out my other options. I ended up buying a Marin Larkspur hybrid, as I’m looking for a good street commuter bike to get me around until my Isuzu Rodeo is repaired (after I save up approx. $2000). They recommended that I get something with strong wheels such as this model. I’m a pretty heavy guy, so strong wheels it is. 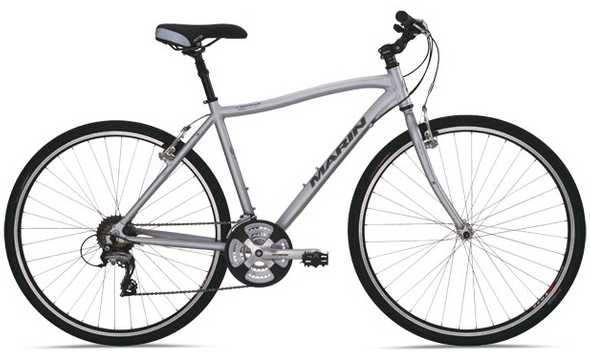 I ended up paying $460 for the bike, and then re-investing into a new rack for the back, a solid U-Lock (instead of a cable lock), and front and rear lights for night time riding. I would have used the other lights I bought from Walmart, but they broke from the tension I put on them mounting them to the new bike. It doesn’t matter anyway. The new lights mount properly and I can easily take them off when I part the bike somewhere, so they don’t get stolen.

I love my new bike. I like how I can bring it back to the bike shop and they’ll fix it up for the next year. Also I like knowing that the bike shouldn’t have any problems like the Huffy. Over the weekend I used the new bike to go do my laundry. 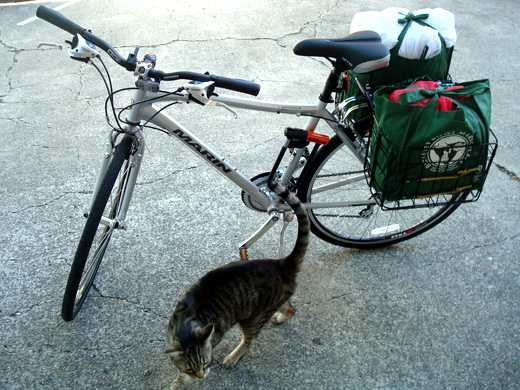 So anyway, I’ve been taking my new bike into work and parking it next to my old bike. I really need to get rid of the Huffy, but I’m not sure what to do with it. A friend of mine suggested that I take it into Walmart and ask for a refund, store credit, or something. I checked for the Walmart return policy online before

I left and went all the way over to the Walmart in Oakland. The policy online, and at the store, does not state that bicycles are an exception. At the store it does cite that there are terms regarding certain electronics/computer items. The lady at the custom service desk told me that they will repair the bike, but do not accept returns if the bike has been used. I asked how I can get it fixed, she said the group of people which can fix the bicycles are not available tonight, but will be available tomorrow (I’m not available tomorrow night). I checked for signs back by the bicycles, and also around the custom service area, but nothing pointed out this exception in writing. I don’t have my receipt with me, so I decided to not try to fight it, because I’m sure they’d call me out on that technicality.

I still don’t want to go all the way back there just to be defeated, so here it is online for everyone to know. Walmart will not take back the low quality bicycle you buy from them. If you’re going to buy a bicycle from them, I hope you consider it expendable. I bought a $70 Roadmaster mountain bike from Walmart back in 2007/2008, and it had issues with the brakes, and other minor things, but it was only $70 so I figured you get what you pay for. I didn’t think that after only 2 months of riding a $150 Huffy that it would come to this. I’m going to just donate the Huffy to an organization or someone in need… but I know now to tell others that seriously, if you want a bike…wait till you have enough money and buy a good one from a bike shop that will maintain and repair the bike…because a Walmart bike will only end up in the trash.

Update 01/03/2012: I continued to ride the Marin Larkspur bike for several months as my main transportation. This bike has not had any issues what-so-ever. It’s worth investing in a nice sturdy bike that won’t break on you, even if you ride it daily.