When I was a child I remember having some sort of curiosity, and other subtle feeling that I consider pleasurable, that arises when I would see something presented as esoteric, and possibly magical. Sacred geometric art, pyramids, accounts of alien contact, etc, can sometimes bring up this feeling. I remember watching Unsolved Mysteries, narrated by Robert Stack, in the late 80’s and early 90’s (my formative years), and really feeling drawn to the sense of mystery in the stories.

I can only see this as a possible reason why people are attracted to medieval fantasy like Lord of the Rings, The Sword in the Stone, or the Dragons of Atlantis game. I can think that perhaps some sort of catharsis might exist when one imagines a simpler time devoid of technology. These things might have those benefits for some, but for me it’s these types of things applied to a possible reality that intrigue me.

Surely there is a skepticism that I’ve developed for mystical falsehood. Fundamental religious propaganda, such as that of the Baptist Christian persuasion, can instill much fear in a young child. As a child becomes more aware of the world, and questions such authority, resentment and a strong sense of rejection can take over. For me this occurred, and it resulted in a strong identification as an ‘atheist’. Nonetheless, even today I avoid fortune tellers, as I’ve never had an experience which showed such ability in seeing the future to be true. This doesn’t mean however that seeing this illustration of a fortune teller doesn’t elicit that kind of feeling of mystery in my heart.

This seems to give the sense of a wise old person, that may be eccentric, but that understands magic. In fantasy you can suspend a sense of disbelief, which means that in such a context you can feel this reaction to this image. But why do we feel this?

I’m really curious about our real history. What is the origin of playing cards, or tarot. Why were hearts, spades, clubs, and diamonds chosen? How did we discover the tarot?

What do you feel when you see this pentacle? 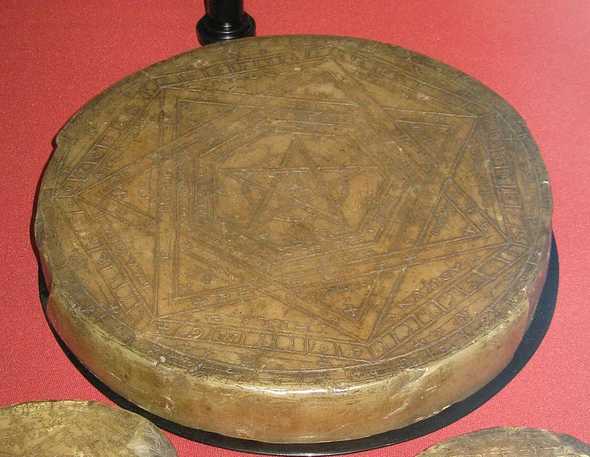